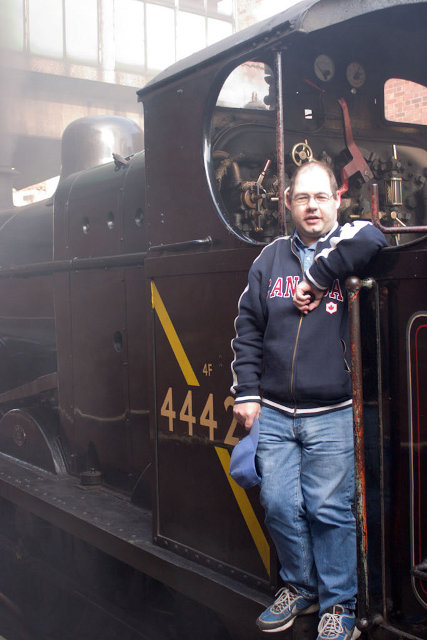 At Bury Bolton Street, on the East Lancashire Railway, October 15.2006.

Hello there! My name’s Stephen.

Welcome to my website and blog, about my planned round the world trip. I live in Sydney’s inner west.

I first caught the travel bug many years ago. Most of my previous travels, though, have been more for chasing after trains. I’ve had a long standing interest in railways – ever since I was in high school. As a result, many of the places I travelled to, I never really took time out to see the sights, and experience the local culture – I was simply quite happy just standing on the end of a railway platform taking photographs of trains, or simply watch them pass by. This all changes on my upcoming round the world trip. Does this mean I won’t be photographing trains? On the contrary, I plan to spend a little time doing that too. But it certainly won’t be the only thing. I’ll be getting out and about, seeing things!

This trip will be the most ambitious trip I’ve ever taken. Most of my non-stop travels have been no longer than a month. Other times, I’ve either stayed in the one place or lived there. This will be the first time I’ll be constantly on the move for an extended period of time. Hopefully my body will be able to last! Of course, there will be times where I’ll just stop and chill out for a week/month or two, and recover – buy new shoes, etc.

Originally, I was going to do this trip by train, bus, boat, and so on – your ‘average’ backpacking modes of transport. However, I’ve since been otherwise inspired. Instead, I will be travelling by bicycle. This gives me complete flexibility to set my own schedule. I can stop where I like, for as long as I like. And, if I really wanted to, I can still take the train! The plan is to travel on as few aeroplanes as possible. I feel that flying is cheating, on something like this. As Michael Palin once said:

“Air travel is just a way of seeing airports. Real travel is something you buy at the bookstand, and read about in seat 39K.” Michael Palin, Around the World in 80 Days

Of course, there will be times where I’ll have no choice but to fly – particularly across oceans. However, I do hope I’ll be able to cross the South Atlantic Ocean, from Cape Town, to somewhere in South America, by boat or ship – whether that’s hitching a lift on a yacht, cargo ship, or cruise liner. But the plan is to be on no more than a handful of flights in the years that I’ll be travelling.

Outside of travel and railways, my interests are as follows:

My favourite TV genre is sci-fi, particularly Doctor Who and Babylon 5.
I also enjoy watching sports. My favourite sports, and teams, are:

With that said, enjoy my blog!